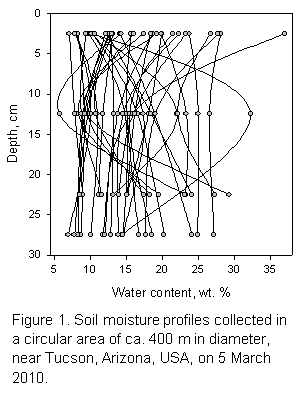 Soil moisture plays a critical role in many atmospheric, biological and hydrological processes, and thus assessment of the amount and the variations in space and time is important to understand the surficial environment. Many methods exist for measuring soil moisture at a point, but they all share the same shortcoming: they do not represent soil moisture over the area around the point of measurement.

The horizontal footprint of 700 m has been obtained theoretically using neutron transport modeling and was recently confirmed using field measurements across land-water interfaces. It depends on the state of the atmosphere: the horizontal footprint increases with elevation due to decreasing atmospheric density and resulting longer mean free path for neutrons, and it decreases with increasing atmospheric humidity due to the presence of hydrogen and resulting shorter mean free path. The horizontal footprint does not depend on soil moisture or soil properties. In contrast, the vertical footprint depends strongly on the total moisture within the soil pore space and soil minerals. It has been determined theoretically using neutron transport modeling to range from ca. 70 cm in dry soils (no water) to ca. 10 cm in soils with 40% water content by volume. In pure water it is ca. 6 cm.

The cosmic-ray soil moisture probe is being implemented in the Cosmic-ray Soil Moisture Observing System (COSMOS) whose main application is in atmospheric sciences. But the horizontal footprint of ca 700 m can be also useful for monitoring soil moisture in large-scale irrigation projects. The cosmic-ray probe gives a measurement that integrates spatial variability over the footprint, thus producing a representative measure of soil moisture. That soil moisture can be treated as the control variable in automated irrigation systems that are activated on soil moisture values predefined for specific crops.

The cosmic-ray probe footprint is comparable to the size of center-pivot irrigation systems (Fig. 2a) that are common in the USA (Fig. 2b) and elsewhere (Fig. 2c). Many of these systems in the USA have the diameter of 800 m (Fig. 2b); others are twice as large. In Africa and Saudi Arabia the sizes vary between 500 m and 1 km (Fig. 2c). The cosmic-ray probe vertical footprint of decimeters captures the root zone of many crops, making it potentially useful in monitoring redistribution of irrigation water either by drainage or evapotranspiration.

At $20k a piece the price of the probe is high, but it can be used efficiently, for example by monitoring multiple areas, such as center-pivot circles, using the same probe. With the cost of water almost certain to increase and the availability almost certain to dwindle, the probe can be very useful in managing water resources that are used in irrigation agriculture.