129-1 Modeling of Structure and Interactions of Protein Alkane Hidroxylase Metagenomic With the Potential to Degrade Diesel Oil By E. Coli Strain Caring the Alkb Gene.

One clone 6A4 in a metagenomic library of the consortium was collected from the site contaminated by the factory that manufactured automotive lubricants site in Ribeirão Preto County, São Paulo State (Brazil) (at 21 ° 06 ‘ S 47 ° 49') were found to contain alkane hydroxylase gene. The alkB gene has been reported as one of those responsible for the bioconversion of hydrocarbons. The consortium was harvested after seven days of incubation and used for construction of a metagenomic library in the fosmid vector pCC2FOSTM. We have been customized nylon macroarrays containing fluorescent probes and the DNA, from the genes hybridized followed the experiments. The genes alkB from the metagenomic library was sequenced and submitted to NCBI / BLAST and was chosen to be an identified undescribed species according to the similarity which showed 86% similarity to alkB gene from Pseudomonas aeruginosa, to be considered the same species the percentage is above 98% similarity. PCR primers targeting the alkB gene in the metagenomic library were designed. The alkB gene was amplified and sub cloned into the expression vector pET 28a using Escherichia coli BL21 (DE3) as the host strain. The clone was tested for its potential to degrade diesel oil 5% (v / v) in defined minimal medium (MM). Cultures were incubated for 21 days using falcon tubes under steady rotation: (1) MM + diesel oil (2) MM + clone alkB + diesel oil, (3) MM + clone alkB. After 21 days of cultivation the culture was inoculated on Luria Bertani (LB) agar plates containing kanamycin and colonies were observed only when inoculated from the experimental variant B (Fig. 1) suggesting that the diesel oil was consumed as the carbon source. The results suggest that the clone carrying alkB has a potential for biodegradation of hydrocarbons. At the same time we use bioinformatics tools to generate in silico hypotheses for experimental testing. The enzymes must be specific and act only on a defined subset of cellular targets to ensure signal fidelity. Identified 12 conserved motifs for alkB being (4) Myristylation, (4) Protein kinase C phosphorylation, (3) Casein kinase II and (1) Tyrosine kinase phosphorylation. Such motifs are putative candidates for structural domains involved in positioning of the primary substrate of these families. The motif may correspond to the active site of an enzyme or a structural unit necessary for proper folding of the protein. The Interpro identified superfamily: Fatty acid desaturase, Domain: FA_desaturase, Family: Alkane 1-monooxygenase.The 3D structure was predicted using I-Tasser Fig.2 (A) alkB protein structure B) model code pdb 3aflA. This suggests that a special feature, our work in situ was cloning the gene for subsequent crystallization. 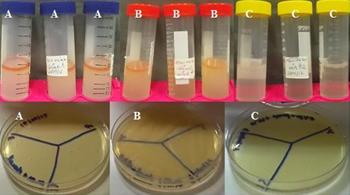